This may be on of the most controversial post I've ever written for this category, but if you've read this blog enough times before, then you know that I don't give a damn. For I don't call it like I see it,...I call it like it is.

Have you ever noticed how when a debate over a certain matter arises, those who are against it are totally "anti-" while those who support that thing considered bad are more open to giving the indiviual their God-ordained right to choose? With that being said, as the debate over barebacking wages on (mainly in the gay porn industry), I've come to realize this:
The sides in the debate over barebacking should not be worded as "anti-barebacking" and "pro-barebacking". Instead, the sides should be worded like those in the debate over abortion, "anti-" and "pro-CHOICE".
The term "pro-choice" is one I have never really heard of in the barebacking debate. In the debate we usually only hear of "so-and-so is against..." and "so-and-so supports...". But the truth is people who say they are against barebacking while I don't fault their good intentions, I feel coming at people with an attitude like you're the Sex God therefore justified in policing their bedrooms is not the way. Meanwhile those who are thought to be pro-barebacking or in support of it, like myself (who has admitted to both safer-sex and barebacking) - usually don't have the attitude of how barebacking is the only way to go. Therefore, to say we're "pro-barebacking" is the wrong wording for our stand. Instead, we are more "pro-choice", for we believe in leaving the choice up to the individual by saying to them, "If you want to use a condom - fine, if not - that's fine as well". My feeling has always been that as long as whatever choice you make, both you and your partner(s) are well informed of the risks regarding whichever choice you make, mainly because of who you are making those choices with. So when you are well informed, you are FREE TO BE YOUR SEXUAL YOU. 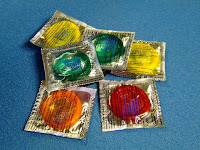 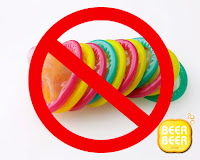 Such an approach is out of respect for an individual's intellect.
Posted by LeNair Xavier at 4:49 AM

Email ThisBlogThis!Share to TwitterShare to FacebookShare to Pinterest
Labels: Barebacking, Write That Down