A couple of weeks ago, I wound up being a part of 2 3-somes in 1 week. I'll start off with a coundown telling the tale of #2 because I need to save the best, #1 for last.
I know some of you who are White Americans were probably quite pissed off by my post, "The Boring Oral" if you either did not read it carefully and/or found yourself to be guilty of doing oral for way too long. Well, this is the story that inspired that post.
I was out with a couple of friends at View Bar on Saturday, and whatever we were talking about, what American guys are into somehow made its way into the conversation, and I pulled up a photo on my cellphone of a fuck-buddy who was an exception to that. Well, not too long after, my phone goes off and it's the guy from the picture. He was calling me to tell me that he was home with a Bulgarian boy who wanted to experience being with a Black man. So while his ears must have been burning because of my conversation with my friends, some other body parts must have been burning as well. Even with that being the case, I was not about to dump my friends for a piece of ass - that would be rude. With that in mind, I asked if I could call them back in an hour, since I predicted my friends would be that much longer at View Bar, which they were. My fuck-buddy OK'd the idea, and I went back to my friends. 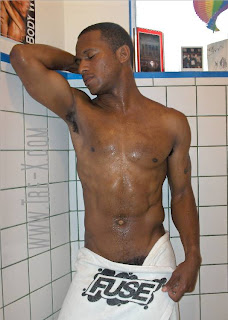 Once en route to my fuck-buddy's place, my biggest concern was what did this Bulgarian guy look like. Well, once there, I was by no means disappointed. Along with my fuck-buddy's swimmer's build and round dancer's butt, the Bulgarian had a slightly more muscular physique and a juicy Euro-booty. The 3 of us talked for a bit, with me and my fuck-buddy on a sofa while with a coffee table between us, the Bulgarian sat on a chair on the other side. One topic of discussion was how this fuck-buddy was one of te main ones who made me more comfortable with being a top. This led to my fuck-buddy initiated taking off my shirt, kissing me, then invited the Bulgarian to join us on the sofa until we were all shirtless, then went to the bedroom, which is where we took off our pants and underwear. This made us all bask in each others' naked bodies, and me the chocolate center of a reverse Oreo.
We had a 3-way kiss, and being the ass-man that I am, I was not going to let this night go without simultaneously groping both of their asses while I was the middle guy in that kiss. We then laid out on the bed and started with some oral. Not too long after, my fuck buddy assumed the position for me to fuck his ass, and I did. The only drawback is that I can't fuck it with the savagery my cock craves to fuck a hole with, but I make up for it by massaging his ass cheeks with each thrust into them. What was adding to my pleasure was that while I was sliding in and out of my fuck-buddy's ass, the Bulgarian was massaging my ass while my fuck-buddy sucked his cock.
I could sense the oral was starting to get a bit long in the tooth for the Bulgarian when he made it clear that he wanted to fuck my ass. I was more than happy to oblige, especially since seeing that naked body, I could decide whether I wanted to fuck his juicy ass or grope it while he fucked my ass. So his request made the latter of those two be the case from my end. 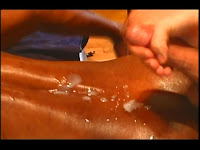 From this point on, I was the bottom for the rest of the night, and into the next morning. After the Bulgarian shot his load, so did I, then do did my fuck-buddy. The Bulgarian then left, which left me and my fuck-buddy alone. And we did what we've did in our last 3-way - after the 3rd party left, we got back in the bed and fucked again with just the 2 of us.
My fuck-buddy started off with the oral, and now I was finding it long in the tooth. And when I wrote "The Boring Oral", I thought back to that night, the next morning and how many times before that night of how it was a White American who made me want to say "Will you stop sucking my dick so much?! I don't want to spend all night fucking your face, I would like to fuck your asshole, and/or have you fuck mine before sunrise."
After that encounter I thought to myself that I've been silent and tried to ignore this long enough. It's time for me to write a wake-up call. And then the following week, "The Boring Oral" was born. So it wasn't just one night of me trying to be silent. It was one of many.

Well, I'm glad to get the tale of that 3-some out of the way, because the next tale of a 3-way set for Friday has a hotter outcome as I help someone explore what they claim is new to them.
Posted by LeNair Xavier at 4:01 PM