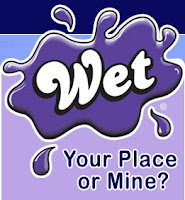 A friend asked me to sample a new product from Wet™ lube. I was curious about what this new type of lube this could be, as he never gave me details. When I went to pick up the samples, it turned out being something that never crossed my mind. It's a new lube meant for couples called, Wet™ together Ultimate Pleasure Gel for Couples.
Don't get too excited just yet. There's a catch. The lube is meant for male/female couples, not necessarily gay couples. However, I was asked to try it out to see how useful it could be for a gay couple. Not such a stretch when you consider how lube does serve a different purpose for a top and bottom in a gay encounter, just as it does for a man and a woman in a straight one.


So does this lube work for gay couples as well? From what I gather from my initial and confirmation playtime with each lube, I should say so.

So I advise you to WET your dicks and asses with this and get ready to get off ----TOGETHER.
Posted by LeNair Xavier at 8:01 PM