Thanksgiving Eve, I ventured over to the debut of Suite 69. I was planning to spend some time there then head over to Daniel Nardicio's Horn O'Plenty. But I got so caught up in the fun at Suite 69, that I never made it to Daniel's party. But I looked at it this way - Suite 69 was new, and I've been to Horn O'Plenty in the past for consecutive years. In fact, I've even go-go danced there, so missing it this year wasn't a sin.

Speaking of sin, I did do a bit of sinning at Suite 69, but believe it or not, that's not the focus of this post. It's what happened after that's the tale to tell.

I got cruised on the subway AGAIN. Did any sex come of it? Again, NO, but that's not the story. It's what this guy did to get my attention, and the fantasy it inspired.

I had to transfer for my final train to get home. The train was arriving as I came down the stairs. The stairs ended at the next to last car, and I usually get in the last car since it stops right in front of the exit of my stop. Even though I could have ran to get to the last car, something stopped me from making an attempt. So what stopped me? The sight of these 2 hot guys getting on the that next to last train car. I didn't think I was going to end up in a 3-way or something, but I think I must have sensed something if I decided to not try going to the last car, and make my exit easier from the subway at almost 4 A.M. Well, I was soon to find out. 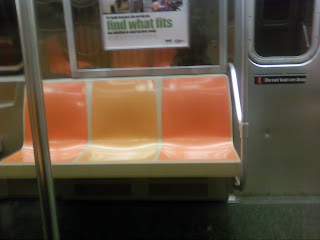 It turns out they were Euro-boys. One tall slim blond, and the other about my height with dark-hair. The one with dark hair sat right across from me, and we immediately started exchanging glances. Adding a little smirk to his, made it clear that he was checking me out. The blond sat next to him talking to him in their native language paying me no mind. That's partly how I figured no 3-way would come of this. I was trying to figure out if they were a couple or not, but the blond's tone seemed a bit agitated, so I couldn't figure out if the agitation was directed at the dark-haired one in some kind of way, or if the blond was just venting. Either way, for the most part, it was a chain of people ignoring each other as the dark-haired one seemed to pay the blond no attention, and the blond paid me no attention.

With the uncertainty of what they were to each other, I avoided eye contact with the dark-haired one who seemed more and more determined to get a reaction out of me. I could see him watching me with my peripheral vision, and then  - he decided to up the ante.

The dark-haired one put his right leg straight up and leaned his foot on the pole to the left of his seat. And by his continued glares at me, he wanted me to see him do this trick. Because I'm sure he knows like I, that any top or versatile gay male, and any straight guy is turned on by discovering that someone they fantasize about is flexible. So imagine how the video that played in my head when I saw that leg STRAIGHT up in the air was similar to this one:

It was a vision of me running over to him, ripping the seat of his jeans open, and also his underwear  (that is, if someone as sexually provocative as he showed himself to be would wear any), then wet his eager hole and my cock, and ram my hard-on right into his ass, while the blond and everyone else in that train car watched. Watching me make him beg for me to thrust harder into him. With me able to see his hard cock (most likely uncut) creating a bulge in his pants because he's so glad that I'm inside him. And no matter what orientation the other passengers were, they would get turned on by our loud moans showing how we didn't give a damn about them watching, because we were glad to let out that sexual tension that sparked the moment we sat in front of each other in that train car. Then that dancer-tight hole would squeeze my man-milk out of my cock and I'd spray it all over the crotch of his jeans. And I would soon discover that he's a cum-pig like myself, so he insist on going the rest of the train ride wearing my creamy white load on him for everyone to see.

Then comes the reality, where I knew that couldn't happen, so I put my head down. Because of my tiring frolicking at Suite 69, I started to nod off, and I missed seeing these guys get off the train. By the time I picked my head up, all I got to see was them walking up the stairs. This got me a tad pissed off at myself, because you never know....had I kept my eyes open, I might have gotten an invite to wear out the ass of that dark-haired one, and maybe when the blond was done venting, he would have been interested after all.

Well, it seems that each subway cruising encounter I've had seems to come closer and closer to a real out-cum. So I think it's just a matter of time before a real encounter to tell a tale about does come to fruition. Stay tuned....
Posted by LeNair Xavier at 10:12 AM