Recently, I ventured to a website where if you download the software, what you'll get is a hot model doing a striptease for your viewing pleasure. As long as you decide not to pay, all you will get is just that - a tease. However, if you actually purchase a model, he strips the Full Monty, and some even do cumshots. I will admit that I did purchase some models, but I won't be making buying much more, if any, and it has nothing to do with what I'm about to say next. In fact, it should incite me to buy more. 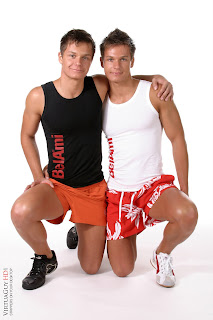 Of those models I purchased, one was a set of twins, Bel Ami models Elijah & Milo Peters. I've mentioned before how I fantasize about being tag-teamed by twins, but that no matter how you look at it, it's still being one brother's cock in your ass directly followed by another. And if it's a double-penetration fantasy, it's even more incestuous because it's two brothers' cocks rubbing against each other.

Well explain to me why I (1) purchased them in the 1st place, and (2) got off on watching them touch and fondle each other?
I can explain #1 as the fact being that I was blinded by the popular fascination with twins, so it took priority over me considering what I might see should I purchase having these twins pop-up on my desktop. So now #2 has me feeling a bit guilty.

It's quite understandable why I feel so guilty right now. Even though the Peters twins didn't have sex, after word of another set of twins actually having sex caused me to give my 2-cents at GayPornTimes.com, I'm feeling like somewhat of what I can't stand...a hypocrite.

It may also explain why with 10.0 being the highest possible rating, that the highest rated of their 3 shows is 8.79. It's most likely because many feel just as guilty as I do, and they took their guilt out on their scores. And I feel that's not fair to the Peters twins. That's why I admit to the fact that my dick was throbbing hard looking at them, and imagining what they would be allowed to do with me if such an opportunity to play with them was possible.
I wouldn't allow myself to have the double-penetration fantasy, but the twin tag-team fantasy however....still stands. Setting those limits in my fantasies helps me get over my feelings of being a hypocrite a great deal. Which is why everytime they pop-up (on my desktop or as a screensaver) I imagine them taking turns taking their lubed-up sweet uncut cocks sliding them back and forth in my ass. And for a creamy finish, letting them shoot their loads on me, and taste each one individually. Maybe even make a game of it where the twin with the better tasting cum gets another go at me.

And after looking at the likes of them, do you see a reason for me to want to change that?
I didn't think so.
Posted by LeNair Xavier at 12:10 AM