Once I decided to not attend Hustlaball NY this year, I was going to write a post about why. It was gnawing thought in the back of my mind telling me to write it, but I tried my best to ignore it, and move on to something else. But those were voices in my head. This past Friday however, I was at the indoor pool party, Baña, and someone asked me if I was going to Hustlaball NY. And when I answered "No", their response was, "Are you boycotting?"


What was strange about his response was the fact that boycotting is based on a social matter, and I don't recall ever making public any disapproval with Hustlaball NY in that regard. Annoyed that I offered myself as a performer to no avail, YES, but that comes with the territory of being a performer in any medium, including the adult industry. Disappointment with the shows, YES. Both of those things, I do recall voicing my opinion on last year, but both of those things may incite apprehension to attend, but not a full-on boycott. That is UNLESS, I can see a social matter is at fault here, which there is. Therefore, the fact is that I am actually boycotting Hustlaball.

What I find amazing is the fact that this guy knew it, even though I haven't even discussed what I'm about to say here (or the subject of Hustlaball period) with anyone once the announcement about Hustlaball NY came out. So it's quite plausible that he sees the same thing that I am seeing, even sub-consciously, and knew I would take a stand on it. I was going to take a silent stand, but once a voice outside of my own entered the picture to suggest I was taking a stand, it took that as a sign to make my stand public.

Let's be realistic, have you seen the list of entertainers and sponsors? In regards to entertainers, could it get more light-skin only and predominately white with one of the few (and practically ONLY) named dark-complexions belonging to Diesel Washington, and it's quite believable that's the case only because he is one of the few Blacks represented by one of the sponsors, FabScout. And speaking of FabScout, that brings me to the list of how lily-white and lacking in diversity the list of sponsors is. FlavaWorks is a Gold Sponsor for HustlaBall.....in Berlin. Why aren't they sponsoring it here in NY? Here in New York where the roster of performers for HustlaBall New York can be more reflective of the diversity in citizenship therefore patronage that exist here even more so than it does in Berlin . So as far as the list of performers go, that's why I'm boycotting HustlaBall New York.

Now my final reason for boycotting is plain and simple...HustlaBall New York is a rip-off. 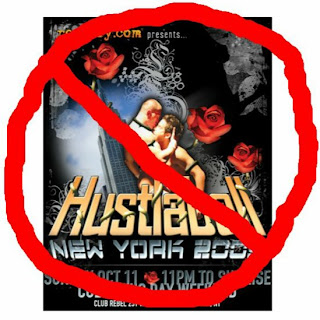 I have never been to a HustlaBall outside of New York, but I know others who have, and I have seen the ads for other like the upcoming one in Berlin. In short, HustlaBall overall is marketed to come off with the sexuality at a height like it's another Black Party. Maybe the Berlin version is, but the New York version is an over-priced imitation, yet you are paying practically the same price as you would to get into the Black Party . In other words, it's the typical American attitude of prudishness towards sexuality that is crippling New York City's gay nightlife. The Black Party flips the bird to it. If HustlaBall NY is going to market themselves to be so much like the Black Party, why can't they man-up and flip the bird to that prudishness as well?

Some of you may have already bought tickets for HustlaBall NY, and are now asking yourself, "Why?" Well, if you see all that I have stated here at this year's HustlaBall NY, take this as a lesson learned to not make the same mistake next year. I made that mistake twice already. It would be quite foolish of me to do it a third.

Let's just hope HustlaBall New York steps their game up, and proves me wrong. BUT how often does that happen?
Posted by LeNair Xavier at 12:10 AM