You might think that after losing my job at Kenyon & Kenyon LLP back in March, that like many, I would be in some degree of misery. Well, if my blog posts since then is any indication, then I'm not in a degree of misery. In fact, I'm actually happier. Happier to the point that I will even dare to say that my writing has become better since that time.

I can't believe that I actually have to thank that HR Director for being a bitch, and my former manager for being the administrative staff's lap-dog. As I said in that post, I gave them a reason to fire me. The problem is that they were looking for one, not because I was a lousy worker (because I was actually one of their best), but because I stood up for people who worked in fear of justifiably speaking their mind. And I don't care how many jobs I lose in my lifetime because I stand up for the underdog, for doing so ---- I will never be sorry. For I know, it will bring forth good karma.

That good karma may very well be hovering over me right now. I recently told my friend Anthony that in spite of some financial strain from being unemployed, I feel richer being unemployed than I did when I was employed.

For me, or anyone to be able to make such a statement is a real shame to the workforce of our society. And what's worst is that I know I'm not the only one. To make such a statement means that the company you were working for was not doing their job of keeping up good company morale. You see, company morale has a ripple effect. It starts from the center, and continues its effect on everything else in it's surroundings. That center at Kenyon & Kenyon LLP are the managing partners and the administrative staff. If they are not mentally and emotionally up to par in creating good company morale, then the rest of the staff like the associate attorneys, paralegals, secretaries, and office services people like I was are all doomed to be miserable unless we find a way to avoid that misery. This usually meant performing the age-old tradition of making each other laugh to keep from crying. And with the greatest unfairness, the mailroom got the biggest brunt of being chastised for this with no one speaking on our behalf of how illogical it is to do so.

Since my termination of employment, you have been constantly reading of my involvement with something new. There's my dance video. There's my stint as an extra in Casper Andreas' upcoming film, "Violet Tendencies". There's the Fu Manchu movie I've been working on for my friend Marc. There's my new involvement with Jones Model Management. And most recently, my being a part of Zach Hyman's "Decent Exposures" series. Plus other projects that I haven't mentioned. As well as traveling outside of NYC on my various weekends to Fire Island this summer. What's so great about that is the fact that I grew up never going anywhere outside of NYC, with family or on my own. 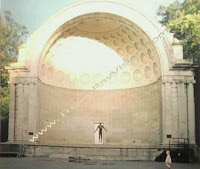 I was able to become a part of most of these things because of my unemployment. I've experience a part of my life that was long known about existing within myself, but at the time during my employment was untouched. You see, while at that job, I always talked a good game about how my future was not there at Kenyon or any place like it, but my actions for the most part spoke differently. I allowed the incompetence by way of inconsistency of the administrative staff at Kenyon & Kenyon LLP with their changing of the rules of taking days off, and unwarranted reprimands halt my progress. Now that I am no longer there, I am now unchained and unconfined. But don't get me wrong, I am still very much looking for work, because unemployment compensation doesn't last forever. But at least, my time unemployed has been used to start me far enough on a path that my mind and body are so free to chase my lifelong dreams that I am ready to take on the world with little chance of backpedaling.

They say the Lord works in mysterious ways, and if my life right now and the direction it's headed - while being unemployed of all things, isn't proof enough, ----then I don't know what is.
Posted by LeNair Xavier at 10:19 PM