You may recall in my last post, my mention of my posing for photographer, Zach Hyman's latest photo in his "Decent Exposures" series. I decided to wait until the unveiling to tell of any of the emotions I had while posing for this photo.

First off, minus the watermark, here's the photo, entitled "Resurrection": 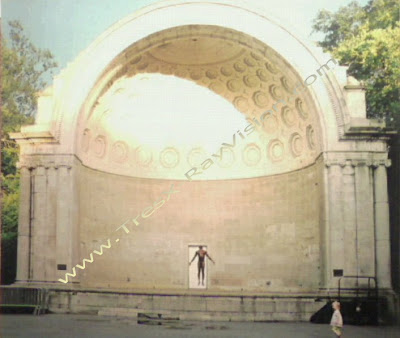 To my surprise, a friend of mine took this picture of it with his cameraphone. For a much clearer picture, you should venture to Zach's website to see all the pics in this collection by clicking HERE.

In my previous post, I mentioned how special this shoot was. What made it so special was because while it was the shortest nude shoot I have ever done, it was also the most liberating.

In previous nude shoots that I've done, whether it was in a studio or on the set of one of the porn movies I had done, until this shoot, I didn't realize that those were safe confines that I took for granted. On my previous nude shoots, everyone in the room is in the same mindset of what they want to come of this. Everyone knows that a nude body is going to be on display, and they're OK with that. But for shooting "Resurrection", we were out in Central Park. In front of an unsuspecting public where the mindsets of 2 extremes and everyone in between collide. One extreme being those applauding what we were doing, the other extreme being those hypocritical prudes damning what we were doing, and in between being those who shrug it off by saying, "Just another day in New York City."

The friend who was with me at Art Live 09 at Chair And The Maiden Gallery, which is where "Resurrection" was unveiled (along with the works of many other talented artists) called me Friday night to tell me that Zach Hyman was on CNN. I quickly turned the channel to see the tail end of him and Kathleen Neill, the model who was arrested the previous week at The Metropolitan Museum of Art being interviewed by Campbell Brown.

What I gathered from those brief minutes of Campbell Brown was the very same hypocritical prudishness that I mentioned earlier. There was nothing obscene about the shot I or any of the other models did. Yes, they may have been children around, but none of us were masturbating, or engaging in sexual activity of any kind. We were all ONLY 1 thing - nude. Therefore, in not 1 single photo in this series did we contribute to the delinquency of a minor, as that security guard at The Met tried to imply about Kathleen Neill, so they could make themselves look like a hero by playing on typical American repression of so many natural things. If any of the minors that saw any of these shoots became delinquent, they probably started at home with their parents turning a blind eye, long before they saw any of us get naked.

It will be a long time before I forget this shoot. In fact, I doubt if I ever will, because as you can see, it has caused me to look so deep into so many things. Some I have thought of in the past, and some I haven't thought about much at all. And it's ventures that make you look beyond the surface that are the ones that stay with you the longest.
Posted by LeNair Xavier at 8:10 AM