I seem to know how to pick guys to make out with at parties whose sexual energy combined with mine will cause sexual behavior to become infectious. I've done it at Baña, where everyone was sitting around in the jacuzzi, like scared teenage male wallflowers at a school dance. Me and a friend started making out. When we got out, we looked back to find guys starting to follow our lead - finally.

The same thing happened at a sex party recently. On 2 floors, no one was doing much of anything. With that being the case, the attendant I was attracted to had some free time, so we started making out. THEN guys wanted to either join in with us, or start their own thing with each other. Well, I may have done it again recently, and with someone I have told a tale about before.

Not too long ago, I went to this party that had a "Scout" theme. There was a tent on stage, just as the ad said there would be. The ad also said that "whatever happens in the tent, stays in the tent." I knew that if I had a friend along with me for this party, it would have to be someone I could have fun with, and maybe take advantage of that promo line about the tent. Therefore, it should be no surprise to know that I forwarded the email to my partner in crime from Daniel Nardicio's XXX Birthday Cruise - Sleaze On The Seas, and he while he was at first considering laying low that weekend, it didn't take long for him to change his mind, and meet me there.

We didn't go at each other as soon as we saw each other. We talked, danced a bit, and then he suggested going into the tent. We made our way to the tent, slipped inside, and had an oral field day on each other. The more I sucked his dick, the more I wanted it in me, but I was quite patient before asking, "You wanna fuck me?"

He had a bag with all essentials of condom and lube just as I had them in my pocket, and we went at it. I was surprised at how many positions we pulled off in that small space. It was a tent big enough for I believe 2, but no more than 3 people to sleep in. FUCKING IN IT is a different story. I guess like they say, "if there's a will, there's a way". 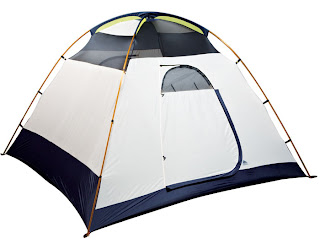 And we did wind up putting on a show, because the design of the tent is similar to the one in the picture on the left. It had mesh all around it just below the dome, as well as mesh on the top half of the door. So you could easily see something was going on in that tent from looking from the front. But if you got right up on it and looked from above, you got to play voyeur to a live sex show.

Tales like this is why I've come to like showing my exhibitionist spirit away from the camera. It's just like how many mainstream actors say they prefer stage to recorded media of film & video. With the stage, you get that immediate reaction, and you can see the effects of your performance on the audience, but with film & video, you can only imagine.

The same holds true with having sex in front of many. You have an audience of voyeurs with their hard-ons saluting every proper thrust by the top, and every correct vocal and physical response from the bottom. Every top in the crowd wishes every tingling sensation going through that top's dick was going through his, while every bottom wishes the sensation of that dick going back and forth rubbing the nerves of the performing bottom in such a pleasurable way was rubbing that way through their own canal. Hence how the party begins,....

....and hence why I love to inspire by fucking LIVE.
Posted by LeNair Xavier at 12:01 AM