In Memory Of My Friend, Andrew

Sunday evening I got some sad news. The mother of my dear friend, Andrew Jonas called me to tell me that Andrew had passed away around 4:30 that afternoon. This was totally unexpected news to me, because as far as I knew nothing was wrong with him. I was understandably numb at first, and the whole time I was talking to his mom on the phone, not a tear came to my eye. I was already out, and planning on going out to Daniel Nardicio's new party, SpeakEasy after a quick stop at home to shower.
Once home, when I sat down, I broke down.
Believe it or not, I did go to SpeakEasy, and that made me forget for a couple of hours, but once I returned home, the tears came again, then I fell asleep. Then I had one of those dreams that felt so real. The fact it was only a dream should have been obvious, because in it, I never saw Andrew's face, but I heard his voice. I have no idea of what he was saying, but just my hearing his voice made me say, "It was all a mistake. Thank goodness he's not dead."
But then I woke up, and when I realized that it was a dream, therefore my mistaking that dream for reality was the mistake, I laid in my bed and started crying all over again Monday morning.
I have never experienced losing a friend before. Sad to say, but in this day and age, most people my age have experienced losing a friend at least once. My most loyal readers may recall the fact that my social life didn't begin until I was nearing 31 years old. So all the social situations of friends, dating, even a 1st kiss, that teenagers take for granted, eluded me for all those years. In regards to friends, during those teenage years, many of us make our friends that we have for the rest of our lives. So in my case, I have a couple of friends from my early 20's who to my surprise (because of my mindset at the time) fall into that category of "lifelong friends". But since then, few have come into my life to give me that caliber of friendship again.
My friend, Andrew was one of those select few. 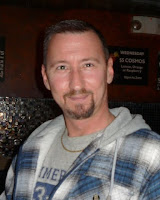 We met at Will Clark's Porno Bingo about 3 years ago when it was held at the 9th Avenue Bistro. Being forever the observer before making myself approachable, I watched Andrew's extrovert personality in action as he was part of Cheer NY at the time, as they were and still are often a beneficiary for some nights of Porno Bingo. I was quite drawn to his extrovert personality as it was opposite of myself. Now, some extroverts I feel are best left alone, but Andrew was one that I wanted to know, because his way of being a social butterfly had a grace I felt I could learn from. We exchanged numbers, and kept in touch. So if asked if I feel I did learn from him. I feel I have. A very great deal in fact. Which is why we had become such great friends over those 3 years.
One thing that saddens me about his passing is the fact that the chance to learn even more has now been taken from me, and the others who felt the same way about him. For Andrew's joyous manner was infectious, even when he himself was not in the best place. And I've always felt that if you didn't catch the "be happy" vibe he was sending out, then the flaw lied in you, not Andrew.
Losing Andrew also means this world losing one of the most thoughtful people ever. He was one of my biggest cheerleaders about my blogging. Anytime I told him of the bad things said about me either in comments here or on another blog, he always reassured me that I wasn't being the whiner some tried to claim me to be. He always reassured me of how I was telling the truth that many can't handle. One of those truths were about racism. I know few White men willing to have an in-depth conversation about racism with a Black man, because they've jumped on the bandwagon of believing it will cause "Angry Black Man Syndrome", so whatever we say will be proof of Blacks being paranoid or over-dramatic. But not Andrew. He never took that low road. Instead, he asked questions because he knew he came from a life where he didn't experience the denials based on race in predominately White environments. He was a thoughtful enough person to want to know what is the viewpoint of those who are unjustly being denied, and what are the signs in the outcome to prove it. So whatever he learned from my blog, he often asked me point blank to go deeper into it. And his bravery to ask and willingness to listen made him that much more special a human being.
There is a little voice in my head reminding me the expression of "be careful what you wish for, you just might get it", and how I wanted friends so badly growing up. It's obviously a negative voice because it's reminding me of how having friends means eventually having to endure the pain of saying "goodbye", so maybe going back to my hermit life is best to avoid dealing with the pain I'm feeling now. I then have to ask myself this:
Isn't it better that I know and love people for a short time, rather than to have never known and loved them at all? If they never entered my life, how would I grow?
I then turn this by asking without Andrew ever entering my life, where would I be? And I answer myself realizing I wouldn't be in a good place.
So after losing Andrew, I'm experiencing for myself of how many have said that God takes all the good ones first. When he took Andrew, so unexpectedly, he most certainly did. And while I am saddened by it, I refuse to ask God, "Why?" As the God-believing man that I am, I have chosen to believe that taking Andrew is God's test for us to continue in ourselves what Andrew brought to our lives and past it on in our interactions with each other. The joyful manner, the non-judgement, the bravery, and the willingness to learn are just a few of the things Andrew brought into so many lives.
May he live on by us passing those ways on.
Posted by LeNair Xavier at 10:43 PM