If you read the NY Post, you may be familiar with the name Zach Hyman. Last week, while trying to do a photo shoot at The Metropolitan Museum of Art, him and his nude female model were arrested for public lewdness.

What is the relevance of me telling you this, you ask? It's because this past Sunday, in Central Park, I became his next subject for his exhibit, Decent Exposures. And the final product will be on display tomorrow night at Chair And The Maiden Gallery at 19 Christopher Street (between 6th & 7th Avenues).

This all came about by way of a friend on Facebook. So to all those who think, nothing can come from networking with friends on Facebook, this tale proves you wrong.

As most of my loyal followers know, I have been photographed by a good number of photographers, including myself. Most being for pornographic purposes. 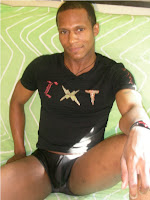 by Tre Xavier
This shoot wasn't pornographic, and while it was special because of how short it was, it was also special for other reasons that I won't get into here. So that come Thursday, we'll have somehting to talk about. Hence why you have to come see me Thursday night at the gallery between 6 -8 PM EST.

Hope to see you there.
Posted by LeNair Xavier at 1:46 AM

Email ThisBlogThis!Share to TwitterShare to FacebookShare to Pinterest
Labels: Come See Me