Do blonds really have more fun?

Well, if they do, based on some recent experiences of mine, it's because something about that stigma causes them to make their fun happen, be they a natural or dyed blond. I have nothing against brunettes, but most that I've been in contact with (at least lately) have been total teases. 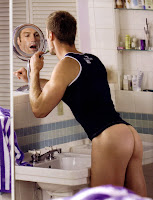 If you surmise that I've been getting a lot of action from blonds lately, you would be correct. Just as I got to the idea to do this post partly because of a blond fuck-buddy from my 2nd after -Queens Pride tryst, I got in the dilemma of choosing which of 2 blonds should I let have me just the other night.

The first blond I believe was a natural blond. I was smitten with him as soon as he stood next to me at the bar to order a drink. Being my usual shy self, I didn't say anything. It was fate that stepped in later to make us start talking.

An older guy was almost stalking me in the bar. He saw me kiss a guy goodbye, and he was still trying to follow me around. I usually feel sorry for these older, out of shape men because of American gay males' obsession with youth. Even though I have less sympathy because they usually allowed themselves to become out of shape, I still try to not be cruel. However, that kind of following when I've made it obvious that I'm not interested does become annoying. I feel like screaming to them, "I DO NOT PLAY GAMES! THIS IS NOT ME PLAYING HARD-TO-GET, DAMNIT! I'M NOT FUCKIN' INTERESTED!"

The natural blond saw the older guy coming after me, and said jokingly, "You seem to have an admirer".

"Don't you hate that?", he continued. "No matter what you do, or how nice you try to be about it they just don't get the hint."

I replied glad to see someone knew my pain, "I know."

He said, "When I see someone in that situation, I sometimes do this-" He then stood directly in front of me being a definite cock-block to the older guy, and started acting like he was in a much deeper conversation with me.

I told him, "Thank you". However what I really wanted to do was ask him if I could repay him by taking off my pants and letting him fuck the holy hell out of me as I position myself properly on the bar stool for his entry into me. Because his coming to the rescue like that made me even more hot for him.

Later on, I went to investigate the backroom, but nothing was going on. 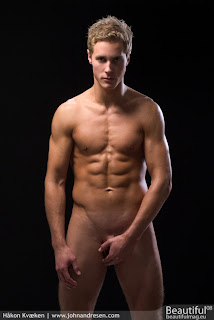 He came in soon after, and then others started to come in as well. While me and the natural blond are looking at the crowd still outside the backroom, I saw one of the go-go boys (who is NOt a blond) that I'm in absolute lust with, and went out to tip him and feel that hot dancer's ass of his one more time. Originally unintended, I put a dollar in the front of his jockstrap, and got to play with his pubes and discover how thick his cock is. I hope my fantasy isn't straying too far from reality because as I fantasize that he's at least versatile, or a total top, his mannerisms and dance moves suggest that if he's versatile, he's more of a bottom.

After tipping the go-go boy, I returned to the backroom room to find the natural blond fooling around with someone else. BUT this did not stop him from losing interest in me, as he reached for me when I returned. So he got sandwiched between this other guy and me. As this was happening, another blond came into the picture.

The blond hottie who felt me up in the bathroom in "Fuck A Prize-Winning Ass" came up behind me. I'm sure he didn't remember me from that, but it was good to see that his being attracted to me wasn't so fleeting that it was for that one night at The Urge and no other time or place. He's the reason why I felt the stigma about blonds having more fun is what causes those who are dyed blond to make their own fun. He not only felt me up, but once he felt my ass, he made it clear that he wanted to fuck it.

Here was my dilemma. Do I stop playing with a guy I've lusted for since he walked into the place, but did the noble act of rescuing me from a possible stalker, so I can let my hungry hole get filled by a hottie who I've lusted over for months since our last encounter?

Whether it's wrong or right, the bleached blond won out.
Evidently, I was in a mood to be submissive, because after I reached into my pocket and follwed my order of putting on a condom, in return I followed all of his orders. Be that order to "bend over", "take that dick" (with his turning out to be quite the hole-filler with it's thickness), or to suck some other hot guy's cock while he pounded my ass. An ass-pounding that went beyond the backroom. It went from there to the restroom, then because the bar was closing, it continued in a nearby park where we got caught by a straight couple as I was going down on him. And he had a stamina that you wouldn't believe, because as each position and place changed, he rammed my ass in a way that felt like he wasn't stopping no time soon. For that, even though his face and body was nothing to scoff at, I LOVED his cock.

We both had living situations that prohibited us from going to one of each other's homes. So we parted ways with the muscles of my ass cheek and back of my upper thigh feeling the workout he gave me. I'm sure we'll run into each other again, and I hope we pick up where we left off.

The blonds coming after me doesn't stop there. Another guy who is part of the idea for this post is a natural blond from my past that I ran into just last week, and exactly 7 days later I ran into him again last night. We originally met at the sex club, Paddles. I refreshed his memory of this when I saw him last week, and as it came back to him, he recalled exactly where in the club he fucked me. After that, his face lit up and he wouldn't stop groping me. We didn't have sex that night last week, and we didn't have it last night, but such often run-ins indicate that fate might be setting up a "reunion" of sorts. And if that is the case, fate will get no argument from me.

With all this blond action happening lately, why don't I put that idea of being gangbanged by go-go boys aside, and get gangbanged by a bunch of hot blonds instead? Hmmmm.
Posted by LeNair Xavier at 12:05 PM