Aftermath of Sex, Then Violence Resurrection

I thought I should update you on what has transpired exactly 1 week since my posting, "Sex, Then Violence Resurrection".

When I write a post about someone, especially when it's negative, I will inform the guilty party. Some might say this is me looking for trouble. The real reason I do this is because while I'm aware that I don't have the most popular blog in the world, it is still a small world nonetheless. With that in mind, I feel it is better for me to inform the person that I wrote about our conflict, rather has some gossiping queen come along and tell the person who is the subject of a post, "Child, guess what Tré said about you? Um-hm, I read it in his blog today. Girrrrl, you need to check it out and verify, child."

It looks better on me if I am the one who tells that person about the existence of that post, because it's me standing behind my words in that post with that action saying, "I wrote this about you because this is what you did. This is how I see you now. And whether or not you like what I said is of no relevance to me. What is relevant is that it's the truth." 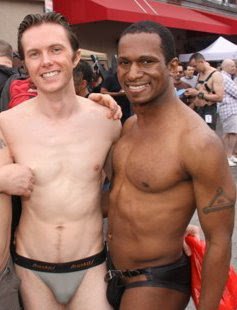 I did S. Sparling no different after posting "Sex, Then Violence Resurrection". I sent him an email informing him about the post, and telling him how sorry I felt for him. He did reply, and the 1st sentences in his reply made me feel less upset about my lost of control. Not the fact that I slapped him, but the fact that as a self-control freak, I lost control. The sentences read:

"I did not say "nigger" and you completely missed any point I was trying to make. I already explained this to you the night you had your fit. It was a sarcaastic, nuanced political point I made that is still, and was, lost on your feeble brain."

First off, being "sarcastic" (when spelled correctly even by a schoolteacher) is meant to be humorous, and he was not trying to be humorous when he said that word. And secondly - what, he said "nigga" instead? From a White person's mouth to a Black person's face in a moment of conflict, that is not a word to be said in any context no matter how you spell it. Therefore, whatever negative reaction that Black person is incited to give that White person, is exactly what that White person deserves. Now, being that I am aware of that fact, who between us really has the "feeble brain"?

From that response of his, he has further incited my dark side whose extreme ways lead me to know nothing of compassion or human concern when it comes to his existence. So if that slap didn't give him a clue, the thought of the extremes it may take before he gets the clue, is no concern of mine. It's the concern of fate's now.

Sparling's stubbornness in this situation may very well be a product of him considering himself "educated". I did get one comment from "The Doc" that made me need to clarify this. Since the comments between us were so long, I'm sure many of you didn't read them all. With that in mind, I will re-iterated about what exactly I meant by condemning the term, "educated".

The way of using the word, "educated" that I am condemning is based on an American perception. An American perception where priding oneself much more so on book-smarts than life-smarts is a stereotypical White American trait. So the reason I'm condemn use of the word "educated" is because it was originated by those bigoted stereotypical White Americans, who throughout history have used the word "educated" to enable a feeling of superiority to those minorities who while not having a higher education, show they have a superior intellect by way of their knowledge of life overall.

I may be such a minority. As many of you have come to like my blog for my displays of intellect on life matters, I am proud to admit that all I have is a high-school education. With that combination, making me still well-read and well-versed are abilities which I'm sure is why I irk the nerves of many a stereotypical White person like S. Sparling.

In short, I believe we should pride ourselves on BOTH book-smarts and life-smarts. That is the reason that I have the friends that I have of all colors. Because while some have been through the higher education system, we have discussed this matter enough that I know for a fact that they understand my saying the word "educated" in that vernacular and agree with me.

So it seems, besides my wake-up call about this person, it seems some good came from this conflict after all. And that's the reason for my including the above pic I found of us. I put this picture in as a way for me to face my mistakes in judgement, but as I read and re-read this post, I will also always take pride in the lessons that are an aftermath of that misjudging.
Posted by LeNair Xavier at 11:31 PM