I have often discussed racism on this blog, and named names of guilty parties in the process. I have never taken pleasure in naming those names. My solace comes from the fact that I don't share their racist outlook, AND my allegations can never be justifiably disputed. Therefore, no one can try making such a claim about me and be justified in doing so. In this case, the guilty party is HX Magazine.

I have held off for quite awhile in calling HX Magazine out on their racist practices. To be more exact, the entire time I've been doing this blog, which is almost 3 1/2 years now. What has changed to make it necessary to speak on it now? I've been putting myself front and center to try and make my way into the circle that HX uses to represents NY's gay community to no avail.

This circle of HX Magazine that I'm speaking of for the most part has no substance. They are a bunch of what could be considered pretty party people, and not much else. Problem is that pretty party people often includes the bad connection to party drugs. What's bad about sticking to that image is for those people they feature who are of substance. That quality is mentioned quickly, and not referred back to often when speaking of that person, so their quality unfortunately gets lost in the shuffle. This form of editing is in a word - stereotypical, and for a gay magazine gets further described by me as "faggoty".

"Faggoty" is what I define as the negative stereotypical behavior associated with being gay, such as being having a narrow-minded view of beauty, and an even greater obsession with youth than the typical American. Hence why in this blog, I have referred to some gay males as faggots, while those males that are not that negative stereotype are called," gay men".

HX Magazine definitely hits the NY gay community over the head with this negative stereotype, and I've tried putting myself in some of their events to break that mold. For example, I have tried to be a contestant in their Mr. HX competition, and responded to their call for models to be on their Pride float and photoshoot. In both instances, they asked guys to write why they should be considered. You can click on the links to read my entries to be considered a contestant for Mr. HX, and a Pride float model.


On both of these occasions, I felt if chosen then HX Magazine would have made some progress in the images they put out to the gay community, but I have come to see that nothing has changed. HX Magazine still acts as Whites and light-skinned Latinos are the only relevant ethnicities of gays in New York City, where a great example of this is with their Mr. HX contestants. Meanwhile, Blacks, Asians, Indians, and other minorities are treated as random trivial spots in the NYC cultural and ethnic canvas.

HX Magazine does show Blacks can be featured in 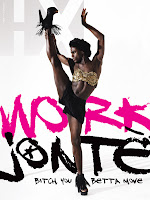 their magazine. But there 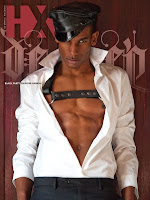 's a catch. That Black person, especially males must be of an extreme. Those extremes being extremely effeminate (like a drag queen), or uber-masculine image of a Black male that I discussed in my post, "White America's Slave Fantasy". But that uber-masculine image is often dolled up by airbrushing to push them to the extreme effeminate, like the ones HX dressed up in fetish gear for The Black Party issue. Proof can be seen by comparing the cover on your right to the video below.
Furthermore, isn't that insulting to the Black citizens of the LGBT community? HX thinks of featuring Black men only because they say the words, Black Party. Is that the best HX can do?

I'm not a sore loser in those 2 aforementioned events. What has forced me to write this post is the fact that I have yet to see any Black man of any build or shade without being extremely effeminate or masculine, with strong convictions needed to better the LGBT community promoted by HX Magazine. HX Magazine promotes the old days of Hollywood where the image is that all Blacks males are good for is to make White people laugh, and Black women can be good for either a laugh, or to sing to the White people.

To further insult my intelligence, not too long ago, I got an email from HX Magazine saying in the subject line, "HX wants YOU". But it is not what you would think. It was actually them trying to ask me to spend beaucoup dollars to promote myself in their classified section. I took this to be along the lines of my quote from "Write That Down #2". That quote saying, "Why let you acknowledge the existence of my color today, when you're going to act like it's a stain to wash away tomorrow?" With that in mind, why would I promote myself in an obviously racist magazine that shows no signs of progressing? That is why unbeknownst to HX, I was considering taken them up on their offer and promoting this site in their classifieds, IF either I had been chosen to be a Pride model, OR I learned of a Black man being chosen who doesn't fit that uber-masculine mold. It would have been my way of saying "THANKS for progressing, HX Magazine".

BUT WAIT, THERE'S MORE TO THIS PART OF THE STORY.

I asked the person who sent me this email asking me to promote myself in HX if they could give me any info regarding my entry in being part of the Pride Issue. Their reply was that the Pride float was being handled by an outside source. Well, if the Pride float is being handled by an "outside" source, then why did the response I got thanking me for my submission come from a design director at HX? And let's say for argument's sake that an outside source was used, then I think HX Magazine should re-think using that outside source again, because another reason for this post is so many being in agreement with me on the racist image of NYC that HX Magazine propagates. And those of you reading this who do agree, I strongly urge you to comment and show you agree, instead of sitting at your computers and nodding your heads, because change will not happen if you are totally silent. This city is my home, and I demand the melting pot that it to be represented.

The bottom line of all this is that HX Magazine like so many, has no idea of what Pride is supposed to be about celebrating. Gay Pride is not about considering someone worthy because they're beautiful ONLY on the outside. They are worthy because of who they are inside, by the words and actions they spread through some medium to better strengthen the spirit of the LGBT community which enhances their beauty on the outside. By their actions, HX Magazine doesn't strengthen the LGBT community of New York City. Instead, they make it take steps back from progressing, because racism, ageism, and vanity have never contributed to the progress of not just gay society, but any society for that matter. With that in mind, those following HX's creedo are also halting the progress of the acceptance of the LGBT community by the rest of society.

So after you've had a chance to let all I've said here sink in and marinate, hear me ask you this - Should color and body type define who should embody Gay Pride? Based on what I've said here, you know my answer. I just hope you are smart enough to share the same answer with me.
Posted by LeNair Xavier at 12:01 PM

Email ThisBlogThis!Share to TwitterShare to FacebookShare to Pinterest
Labels: On Racist Blast