My Smile On 2 Prides

My friend recording artist, Lovari, asked me to be a part of his performance at both Staten Island and Queens Gay Pride. I graciously accepted. What made me so gracious was the fact that Lovari is well aware of my not wanting to involve myself solely in the adult entertainment industry, and this was another recent notch on my belt to making that happen. Thanks Lovari.

Most of my traveling within the 5 boroughs of New York City have been between Brooklyn and Manhattan, with little to no reason to go to the other 3 of Bronx, Queens and Staten Island. Now within this past year, I have hit all 5 boroughs by living in the Bronx, still using the Brooklyn address I grew up at as my mailing address, working in Manhattan, and this past weekend, I've hit the 2 other boroughs of Staten Island and Queens for a very good reason - as part of a performance for their Gay Pride events.

Staten Island was great. It was a nice sunny day, and I got pictures and video of the scenery from the Staten Island Ferry. Do I have photography as another talent? You decide.
We did 3 songs by Lovari, with the last 2 songs having phenomenal vocals by Janifer accompanying Lovari's. Opening with "Work It Out", Lady Clover Honey, David Janet, Appolonia Cruz, and myself were to do runway walks giving attitude. Doing 2 walks during the course of the song, I came put with a pair of black fitting jeans, a black hoodie, and shade. For my 1st walk, I came out with the hood up and shades on, and when I got to the front took them off. For my 2nd walk, I unzipped the hoodie, and took it off, and got shouts of praise that I wasn't expecting.

Truthfully, I believe what made me unexpecting of it was how I've gotten so used to Manhattan's present racial bias especially perpetrated in the media that makes it seem light is right, and all else is irrelevant, so I have to instill an arrogance within myself to know that my being Black still makes me a possible beauty. Because if I wait for some of the most popular gay media based in Manhattan to do it, I'll get a dead silence in return. So for that great response, as well as the one I got when Lady Clover Honey had me go shirtless again as she pulled me on stage to sing "Saving My Love For Daddy" to me, Staten Island showed how that foolishness didn't follow us on the ferry ride over, because it gave me a chance to humble myself. So for that STATEN ISLAND, I LOVE & THANK YOU.

The crowd in Queens also deserves a great deal of praise. First off, I didn't realize how rich in ethnic and cultural diversity Queens is. I am considering moving and while I was thinking either Brooklyn, back to Jersey City, or the long shot of Manhattan, after the mix I saw at Queens Pride, Queens has now made itself a contender.

Lovari performed only 1 song in Queens, and it was the same song we closed with in Staten Island. That song being, "Free To Love", a song he wrote in support of marriage equality. I was honored to be asked to be a part of that. I walked out on stage arm-in-arm with Tass, who I took some photos and video of some time ago when he was a guest caller at Will Clark's Porno Bingo. I guess me and Tass made a good impression, because people like members of the NYC Gay Men's Chorus wanted to take pictures with us. Well, I know for sure that we as a whole made a great impression because during the song, we started a chant saying "No Prop 8! We don't need the hate!". It was so brief a part of the song, the audience didn't feel it right away, but it was obvious that they felt it by the applause we received afterwards. I'm sure some neighbors in Jackson Heights were feeling it. So a BIG THANKS and LOTS OF LOVE to QUEENS, as well. 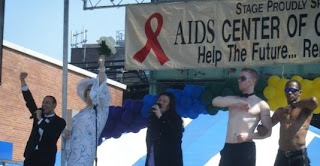 With all the issues within the gay community that I tackle on this blog, you might be surprised why I myself have not been so outspoken for marriage equality. It's because when I realized that with my bi-sexuality that while both women and men got sparked my sexual attraction, men also parked my emotional attraction. This made me solidify some decisions I made for myself, even before becoming sure of my orientation. One of those decisions was my never getting married if I am to live my romantic life as a gay man. I could have a long-term relationship, but I would never get married because "this is how it is". However, with the issue of gay marriage suddenly in front of me, I'm slowly brought to realize that there's a chance that I can change my goal for a long-term relationship, and actually have a marriage. You see when an Aries like myself says, "this is how it is", bending them to a new train of thought may take some time, even when it's for something good.

So if I haven't been so forthcoming in voicing my feelings to support gays having the right to marry, I hope my appearance at these 2 Pride events and what the part I played stood for shows that I am a supporter of gay marriage. Whether I want it for myself or not, I am still unsure, but I do support those gay men and women in love who want to show that love by calling themselves by the blessed relationship status ----MARRIED.
Posted by LeNair Xavier at 9:31 PM