I just had a weekend that I doubt I'll be forgetting any time soon, because from Friday night to Monday night, I went home with a smile. If the smile wasn't on the outside, it was definitely on the inside.

Friday night, I went to the LGBT Center. There was to be a discussion on the book "Bigger Than Life". When I heard that along with the author, Jeffrey Escoffier, that directors of legends from the past Wakefield Poole, Jerry Douglas, and Bob Alvarez were going to be on hand, I had to attend, because I had questions.

I had a question planned for them when I walked in the door, but afterwards re-thought it, but would have loved to have had a long sit-down with them so they could answer it later. I did ask a question though, in fact I asked 2. The 1st question was based on hearing them say as to why they quit the business, I realized their patience was being tried back then just as many performers and director's patience are being tried now. I asked them isince alot of the business b.s. is why they stopped filmmaking, if they felt that by new mediums like the internet playing part in being studios' publicity machine is contributing to some actors and producers, directors, etc. leaving the industry today. I won't give you their answer, because those of you who are fellow New Yorkers should have read Vincent Lambert's blog post and been there.

Saturday, I went to a friend's birthday party at Nowhere Bar. In this case, why wouldn't I leave with a smile. I have a dear friend after years of unhealthy living being anti-social, so yes, after a party, I'm smiling all the way home.

Sunday was a day that had my dirty mind in overdrive.
I got up early in the morning to volunteer for set-up duty at Folsom Street East. After my job was done, I had about another hour before the fair started, so my friend Anthony who lives just a couple of doors down from the corner, let me crash at his place until we both went a couple of hours later. I ran into so many people that I know, some were past tricks, pornstars, including a new fuck-buddy who I recently blogged about. We have such a strong sexual connection that at one point we were watching the performances feeling each other up the whole 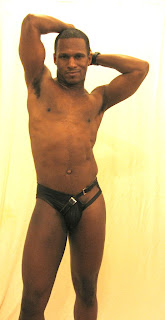 time. You see, he loves fucking my ass, and I fe

el the same about his ass. And considering what we were wearing, that only made us more hungry for it. He wore a jockstrap, and I wore the underwear you see in the pic on the right. I leaned my crotch up against his ass, and between that, massaging his soft cheeks, and my feeling his growing bulge, only made my bulge do the same. Had I brought my "saftey-pack" with me, I would have tried slipping on a condom, and slipped my dick right into his ass right in the middle of that crowd. But without the safety-pack - no glove, no love. So we took a raincheck, and my dick is hard right now thinking about cashing it in. Cashing it 7.5 - 8" deep into his ass.

Sunday night was Broadway Bares 19.0. This was new to me, because I have never been to Braodway Bares, but always wanted to go, so I sprung for a VIP tickets and went. I think the pics speak volumes as to how the horniness of the afternoon was catching up with me. I'm going to so ravish that fuck-buddy's ass when I see him again.

I had a friend telling me I should do it, and since I had so fun being surprisingly recruited to strip-down and dance for his team's fundraiser this past Thursday, I think I may take him up on his offer. So there is a possibility that Tré Xavier will be performing in Broadway Bares 20, so get you donations ready now, just in case.

Last year, I attended the fluff that is called the HX Awards. This year, with my blog post about HX Magazine, by luck of it coming into my lap, on Monday I chose what was a supposedly a much better alternative. to the HX Awards. And that alternative was me using those Beyoncé tickets I won some weeks back. And I can't put into words how much a better alternative it was. Especially since I was sharing it with a good friend of mine.

Beyoncé as always looked like a bronze goddess. I always reserved responding to criticisms of her talents, but after seeing her live, it is official - anyone with anything bad to say about her are a bunch of hateful jealous queens. Because she is an outstanding showgirl fronting a show that can only be described for lack of a better word - AMAZING!!!! It takes a lot to keep up that energy, especially for an entire tour. Energy that is infectious to the audience. What's more remarkable is to see it hit an audience in a huge place like Madison Square Garden.

As you can see, this was quite the weekend. One that definitely gave me reason to smile. And with it being Pride Week here in NY, it's already about to become quite a week. So stay tuned to see what comes up next. Because with me, you never know.
Posted by LeNair Xavier at 9:02 AM