Thanks For The Advocate Support 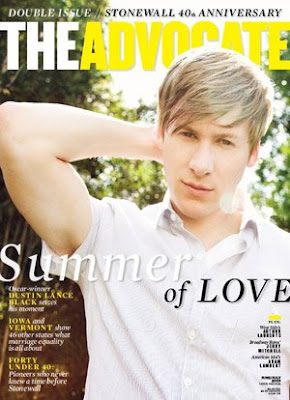 I just wanted to say THANKS to the many who supported me for my comment recently published in The Advocate. I have received emails via Facebook, MySpace, and personal emails from Blacks, Whites, Latinos, and Asians giving me kudos for that comment. With that being the case, getting kudos from such an ethnically diverse group of people tells me that I'm on to something with what I said, and the studios I named (or are guilty of the same and didn't name) should take heed to what I said, and show it by getting a more ethnically diverse model roster.
I am by no means saying this to blow my own horn, I'm saying it because I like being a part of this industry. I'm also a perfectionist, and when I'm a part of something, I want it done RIGHT, not half-assed. And these studios practicing racism is half-assed, as it can force the hand of the ethnic studios to do the same.
I try to always let my readers know how much I appreciate their loyalty. And to still have your support after a controversial statement of mine gets exposure in a well-respected national publication like The Advocate, for that I can't show my appreciation enough.
My Dearest Readers - YOU ROCK!!!!
Posted by LeNair Xavier at 10:02 AM

Email ThisBlogThis!Share to TwitterShare to FacebookShare to Pinterest
Labels: Note of THANKS