Subway Cruisin' - Alas Give In?

I've been having a few precognitive episodes lately. I've always had them, but lately they've been coming like rapid fire. I won't bore you with details of some examples, but here's the latest that relates to this story.

Well, what happened last night? I got cruised in the subway AGAIN. Did I go through with it? Keep reading to see.

I went to the NY Jock Party, and had a lot of fun. Me and this hottie took turns topping each other. He topped me first doggie-style and fucked me hard. What made that hot for me was that he was about my height with a nice lean frame, and I love it when smaller guys pound your ass so hard you feel like a muscular giant has a hold of you. Then I suddenly felt even harder thrust into my ass. I was wondering what was going on, then when I looked at the shadows on the wall, I could see that another guy joined in and made it a fuck-train by fucking the guy topping me. I did catch a glance at the guy, and he was also a hottie. Where are the porn cameras when you need them?

Later on, this other cute guy either light-skinned Black or Latino came on to me. He asked me what do I like to do, and I told him plenty. So we went to the back, I gave him a blowjob, he sat down, I put a condom on his big cock, then rode the fuck out of him. It got so good he needed to get up, and thrust into me himself. So he bent me over a table, and let me have it. His dick felt so good, for the 2nd time that night I came. I got dressed, and went headed home via subway.

I got in the train station, and when I started walking down the platform, while I do wear glasses, I thought this guy sitting on the stairs was watching me. I didn't stare at him until I got near him to confirm. Instead, I glanced at him when I got right next to him, then looked back when I got behind to find him still looking at me. He was tall, slim, and White. I flashed a smile then kept walking quite a few yards more. When I stopped, I looked back to find that he got up from sitting on the stairs to look at me. I kept exchanging glances and smiles with him, and he slowly, but surely came closer. I started playing a bit of a game of "Catch Me If You Can". We eventually wound up with less than 6 feet between us, with him standing under a stairwell, me behind the yellow line on the platform edge, and us still exchanging glances. 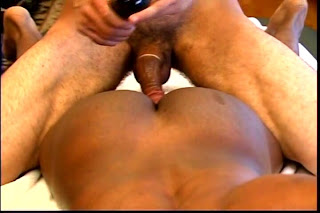 He has his cock out. I saw a thick hot-pink head and cock looking ready, willing, and able to fill already worked ass again. And I've never said it here before, but I am admitting now.... I am a power bottom.

When I bottom, I'm insatiable for dick, and I want his passion thrusting into my hole like a heat-seeking missile rushing to get hit its target and explode. So his big hungry dick would have been another welcomed pole into my ass for the night. When I saw his cock, I didn't know whether to make the adventure be me sucking it on a subway platform at about 4 AM and risk getting caught, OR should I just have let him fuck me right there. Well, his train arrived, and he motioned for me to come with him. So did I alas give in to this subway cruising episode?

I let him go home alone. The big hard dick swollen to sweet hot pink perfection never made its way into my ass. While the horndog that I am is greatly disappointed. My street smarts tells me that I made the right choice.

After all, I did open the lines of communication by saying "Hello", but that was never returned. This here was not the sex party. So if I'm going to hook up with you, we can have an intense physical attraction, but it has to include some verbal communication before that physical connection of your dick to my ass or vice versa takes place.

If I get cruised again, maybe all those wrong moves that I've listed in this and past entries will finally be undone by my suitor, and I'll have a lustful tale to tell. Until then....
Posted by LeNair Xavier at 5:32 AM