There's a new awards show in the adult entertainment world. Some may say, "Oh great, just what we need, another one of those."

That might be the case if it represented an overbearing number of White performers leaving it's multi-cultural buying public out of the loop. But that is not the case here.

It's The FlavaMen Blatino Awards. An awards celebrating the best in Blatino entertainment, where it's multi-cultural buying public is not left out of the loop because not only is there also an Asian category to pick nominees for, but most importantly YOU are the ones choosing those nominees. YES, you have a say in this one guys. Therefore, there should be no complaints of winners being based on a popularity contest amongst industry people like there was with the GayVNs. Plus, in nominating performers, you're not limited to nominating performers who have appear only in ethnic-porn movies. You can choose an ethnic performer who has appeared in what's considered a "mainstream" porn production as well - no special categories necessary.

Speaking of categories, they will be announced in the Spring 2009 Issue of FlavaMen Magazine and at the website for the awards, BlatinoAwards.com. You do your part by sending in your choice of nominees for each category by way of magazine ballot, or the website. 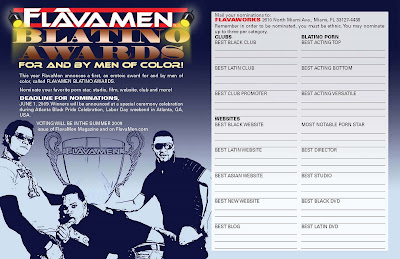 Remember me saying the multi-cultural buying public is not left out of the loop, That's because anyone across the globe who views Blatino entertainment from any company, has Internet access, and/or get FlavaMen magazine can take part in the nominating process. YOU MAKE THE CALL OF WHO GETS A CHANCE TO WIN.

Oh, and did I forget to mention that I'm one of the judges. So me and the other judges have to choose from your choices. We may place nominations as well, but our nominations hold just as much weight as anyone of you, and not a bit more.

So tell us who you're into. Go to BlatinoAwards.com now, and make it known of who gets you off.
Posted by LeNair Xavier at 12:01 AM