Over these past 2 weeks, I've been to Urge bar in NYC 3 times.

The 1st night, I finally went to use the game paks for a chance to win their Monday night game of Money Wheel. I won the game paks as part of the prize from with my last untied win of Ass Wednesday.

I didn't win any othe games, but the ticket also allowed 4 drinks. I had about 3 then stopped. I was feeling it, and decided to ask about dancing there. I was wondering was it me or the "liquid courage" talking, but it was something I was considering asking for awhile now, so I figured this was my lately heightened self-confidence talking that was felt more free because after Money Wheel, the bar became quite a bit less crowded. I was told the days they hold auditions, and one of those nights was Tuesday. So I decided I would come back the next night.

So here's the satifaction rate so far:
Win Money Wheel prize - Unsatisfied
Get up the nerve to ask about go-go dancing - Satisfied
Get the Ok to audition - Satisfied

The 2nd night I returned as I promised myself to audition. The guy in charge ask me if I danced before, and I mentioned dancing at Sugarland and for Daniel Nardicio. I feel with the rep Daniel's parties have, if you can go-go there, you can go-go anywhere.

The guy in charge said to be that I seemed nervous. I told him, "I'm a performer, so I'm always nervous before a performance, but when it's time to go on, I'm ON."

I'm a good judge of vibes and from that question on, to be honest I felt out of place. Like I wasn't wanted there, at least not as a dancer. The 1st dancer to show up was Geronimo from my post about BoyBox. He was the only one of all of them who spoke to me. Every time I've go-go danced in the past, when there's a new face in the room, the regulars of the rotation approach the new blood to welcome him into the fold. No such thing happened here. They were all Latino, and spoke Spanish amongst themselves. None of them besdies Geronimo spoke a single word to me. They all spoke English, they just chose to not speak it to me.

I went up and did my thing 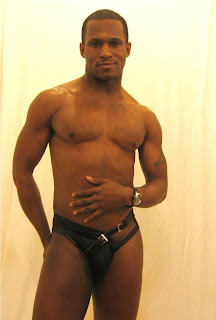 . I feel I did OK, considering the racist jerks who made it obvious they wanted nothing to do with me. Yes, racism is still alive and well in the NYC gay community. One guy who I met as I made my way around, made it clear to me as to why those who tipped me seemed so excited by me. He aksed me where I was from, and I told him I was born and raised in Brooklyn. He and his friend applauded me. He was a White guy, originally from Poland, but was put off my the lack of American-born dancers. Now Tuesday night at The Urge was never billed as a Latin night, but there is some Latin blood pumping in these veins if that was the case. All one has to do is (1)take a good look and see I'm not all African-Ameican; and (2)simply ask, because if you can't see it clearly, unless you're blind and/or stuck on that term African-American, you should see it somewhat.

After I did a go around the bar, the guy in charge of booking dancers asked to speak to me. He told me that I don't have what the crowd was looking for and maybe I should try The Cock, which is the bar 2 doors down. He offered me a free drink, and I accpeted. A good number of people who saw me on the bar and tipped me asked me why was I dressed. They seemed annoyed when I told them I was done. Well, as the Polish guy said, "Fuck 'em".

So the satisfaction rate on this night:
Go-go dancers knowing proper etiquette - Unsatisfied
Feeling like my time was well-spent - Unsatisfied
Seeing there is an audience for me that does hang at The Urge: Satisfied

The 3rd night, was the following Wednesday, I took part again in the Ass Wednesday contest. And once again, I won in a tie. But this time the tie ---- was with a woman.

Before I get to that, I almost wound up in another scenario where I hook up with a trick from there after entering. This time, I got 2 offers, both were fellow contestants. They wound up going off with each other, and I actually wasn't at all annoyed. I did hook up with someone though. You see, after my win at the Urge, I went to The Cock and ran into someone I met a couple of weeks ago. I will say this much about him, if more guys with big cocks hit the spot the way he did, maybe I'd have more of a big dick fetish.
So someone got to fuck a prize-winning ass. It just wasn't anyone at The Urge.

Now back to the contest. The final Ass-off came down between me and a woman. She did have a nice ass, I will admit that. She said I had a nice ass, and she playfully sat on my lap earlier to play like she was stopping me from entering. At this point I had to inform her that I was bi. A lot more gay than straight, but bi none the less. What I left out was that she was inspiring one of those straight moments. Had she not mentioned having a boyfriend, I would have been more than willing to do her doggy-style with her pussy wrapped around my cock, and her ass shaking with every thrust I put in her. And if that thought bothers you, for your satisfaction and my dissatisfaction, it didn't happen. So let's move on.

During the Ass-off, my back was turned to the audience, so I couldn't see who it was, but one guy kept yelling, "It's a gay bar!"

He was pissing me the fuck off royally reminding me of Steve's comment from "Girls...Ew!". I thought to myself, "Not another one of these infantiles!" 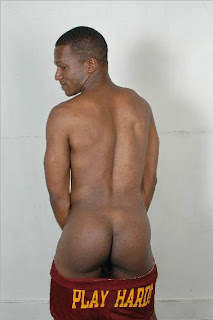 I will say it was close, but I did have the most applause. But when asked if I wouldn't mind sharing the prize money of $100, I had no problem with that. Becuase, it's an "ass' contest, not a "male ass" contest. So if an audience of predominately gay men can find a female ass hot, whatever their reasons, be it racially motivated or whatever, it's just a bar contest, so let it be. Sharing the prize was also my way of not letting that dickhead yelling, "It's a gay bar!" win. He's a dickhead because his making me need to make that point cost me $50 out of the $100 I could have took home by not needing to make my point.

I always try to give credit where credit is due. In this case, I give it to the female contest who knew the identity of that dickhead, and called him out. My fellow contestant was White, and this jerk was Black. He tried using the excuse of my being a Black man being the reason for his outburst. Well, as far as I'm concerned, I was doing quite fine without his outburst. It was sheer racist ignorance taken to the next level, and I'm glad she confronted him, which only made her hotter to me. I'm a fire sign who love seeing someone with fire in them.

By using 9 things to measure my rate of satifaction with Urge, you would think that I would come out with either "Satisfied" or "Unsatisfied" being the winner. But thanks to that dumbshit on Night 3 pissing me off so immensely, I counted that "Unsatisfied" twice - so we have a tie. Which is the reason for the part of the title "...Mixed Satisfaction". Maybe if dumbasses like this would stay home, and not mingle with the society they hate, I'd have a more clear answer.
Posted by LeNair Xavier at 9:01 PM