Yes, you read correct. After 4 trips in 3 years to the Lucas Entertainment offices to no avail, this past week, I got an email from yet another new casting director inviting me in for an interview.

Believe it or not, I did call him. Now, since I never dealt with this person before, I don't begrudge him not one bit in my past regarding Lucas Entertainment. So I was very cordial and polite when speaking to him. I told him my name, and he asked if I wanted to set up an interview. I was very direct, and made it clear of my 4 trips to the Lucas Entertainment offices over the past 3 years, and that unless my going there this time was going to more productive in a way other than me sitting there filling out an application AGAIN as if it's my 1st time there, then there was no need for me to come in.

He said he understood my frustration, and he asked if it would be OK if he sends me an email in which I answered some casting questions and with my reply send a full-frontal pic 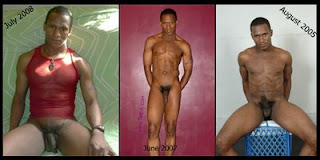 rather than come in all over again. With extreme reluctance, I told him that was OK, because at this point I have just about washed my hands of ever dealing with Lucas Entertainment, and not just because of the number of trips I've made to those offices in the past. There's another reason besides just that one.

The other reason was that my thought from the 1st time I walked into Lucas Entertainment office back in 2005 was this:

I was well aware of the rumors going around saying that Michael Lucas was a racist for casting so few Blacks while being based in a city as ethnically diverse as New York City. So my thought in submitting my photos was it could work for both of us. If my plan was successful, it would benefit me because I would work with a big name studio, and it would benefit Michael Lucas by helping to put the racism rumors to some degree of rest.

After being called in all those times, I began believing the rumors myself. Because based on the simple insight of seeing it from the point of view I believe Michael Lucas should be seeing it. I'm thinking if I was Michael Lucas knowing that I'm being rumored as a racist in an ethnically diverse city like New York, then I would squash that rumor the second a good looking man of color who looks as good or better than his photos walks through my door by hiring him. And if it's more than one, even better to help squash the rumor. So since I was called in, and I'm often told that I actually look better in person, my hope was that my presence would start that change. So it's only natural that after not 1, not 2, not 3, but 4 trips to those offices, and I have yet to be in front of a camera on a Lucas Entertainment set in a featured role, that I would join those thinking Michael Lucas to be a racist. Although, it's something I very much did not and still do not want to believe.

Now, I as always try to give credit where credit is due. With that being said, I am quite flattered by the fact that each new casting director at Lucas Entertainment has contacted me.

In the past, I have taken half-days off from my day job to make those visits to that office. Now while I have gotten paid for those half-days, the way things turned out, I could have used those half-days for something that would have shown some actual progress. Instead what happened? Each trip to those offices, I went through the same routine of filling out an application like I've never been there before, or like I'm a 1st time model. So the only progress I made was having material to blog about in which I speak negatively with the utmost honesty about Lucas Entertainment casting practices. Which I would much rather not be justified as I am in doing so.

NOT THIS TIME! While people in their early 20's have an eagerness to please their perceived superiors, which many bosses take advantage of, one thing I've noticed of everyone who is maybe in their very late 20's, but definitely in their 30's (like myself) and beyond is that they find that they HATE to have their time wasted. That's why I'm feeling the way I do about this situation. There comes a point where you have to say "ENOUGH IS ENOUGH!!!!!", and I had to say after trip #4 (when it usually would be after #3), that this is that time.

So will something come out of my reply? Based on past experiences, if I hold my breath, then I'd soon be dead with a strange shade of purple all over my face. However if things have changed there, then I'll soon have some good news to report for those of you that seem to want me in a Lucas Entertainment production. But as always, it is time will reveal all.
Posted by LeNair Xavier at 10:25 PM