The Lust In Me For Logan McCree

I have a strong attraction to men with tattoos. I mentioned it before in one of my post for my "Getting Out The Kinks" series. But there does come a point when it is just too much. You would think someone who I would have that opinion of is Raging Stallion exclusive, Logan McCree. But actually while he has way more than most, he has just enough, and they are placed just right.

I think I would have a different feeling about all his 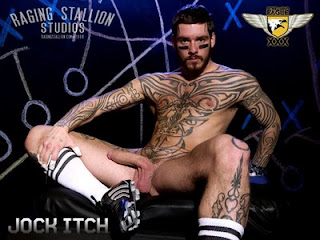 tattoos if they were in color, because there has never been a guy with close to that many tattoos or more that I have found sexy. But Logan is a whole different story. I think he's straight up and down a tattooed stud, and if he ever gets a case of jungle fever, he can feel free to releive himself of it on me.

As I said before, I see tattoos as an extension of the person. I especially find them sexy when they are somewhat raised on the skin, as mine just happened to somewhat be. I wanted my tattoo as an extension of myself, which is why I designed it and had it done about 10 years ago. I've designed others, but have been too much of a chicken shit to get them put on, and since that time, I've lost the designs on paper. The basics of them however are still in my brain.

Logan's tattoos definitely tell a story about him. So much so, they look like a uniform of some kind, and if you try to imagine them 3-dimensional, and fill in the spaces, you would have a artistically designed suit, possibly of armor. With that in mind, he's perfect for those who like to get fucked by a man in uniform. You get the uniform by way of his tattoos, yet you are not denied the view of his fit physique.

e that I am, I am also looking at his tattoos through the eyes of an artist. Like I said earlier, I designed my own tattoos, and I am not such a self-involved artist that I can't admire others' great work. And whoever did Logan's tattoos did some phenomenal work, and Logan himself must have a great artistic eye to have them so well placed on his body.

Well, by taking note of such distinct details about his hot bod, what more can I say but the obvious - I'm in lust with Logan McCree. And I know I'm not alone. I wrote this blog just to find out how many of you also have your tongue hanging out of your mouths every time you see his tattooed cock sliding in and out of some guy's wanting hole,

or his tattooed ass bounce from some ass-hungry stud banging the hell out of it.

I'm glad you showed yourself. Now, wipe your drool.

And for the pics (except the vidcap), give a BIG THANKS
to the courtesy of Kent Taylor at Raging Stallion Studios.
Posted by LeNair Xavier at 10:45 AM

Email ThisBlogThis!Share to TwitterShare to FacebookShare to Pinterest
Labels: In Lust With