Getting Out The Kinks: Extensions, Ink

Since starting my "Getting Out The Kinks" series, I have brought to light some kinks that some of you never thought much about. Well, this one I'm sure some of you have, but have you thought about why you like it?


The "it" I'm talking about being tattoos.

For a moment there, I thought my previous post for the "Getting Out The Kinks" series was my last. Then one day, when I was looking for pictures of Justin Christopher to use in my post about my romp with a very well-endowed Frenchman, I went to Raging Stallion's website and saw under "New Releases" the thumbnail of the cover for "Ink Storm". Even with it being a thumbnail, I knew the guy on the cover was HOT. Every other time I saw someone that extremely tattooed in the past, I didn't find them attractive at all, so I had to click on that thumbnail to see if my eyes were deceiving me. It turns out they weren't, so now I had to find out the name of the guy I knew I was going to beat my meat to. 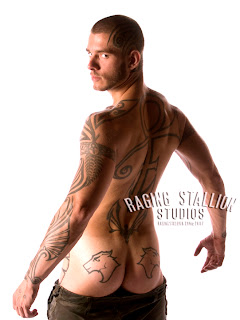 
I think what makes Logan McCree still sexy with so many tattoos is the fact that all of his tattoos are solid lines that don't completely hide the skin, unlike the other people whose many colored body tattoos I find unattractive. Therefore you can still see how sexy and handsome Logan is, because a person's natural skin color is one of the keys to a person's beauty. So I'm sure every reviewer out there with a brain will agree with me on seeing Logan McCree's sexual charisma because of that, whether their a fan of tattoos or not.


After seeing other pics and where else Logan had tattoos, I was definitely in lust. Especially after seeing the ones on each cheek of his ass. I've always had a thing for guys who put tattoos near, but especially on their ass. Then I realized wanting to see this inporn started with Raging Stallion.

I have always seen tattoos as an extension of the person. And I find them even sexier if I can touch them, and the skin is somewhat raised from when it healed like mine. 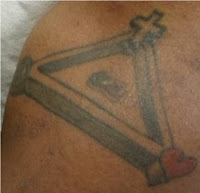 That's what turns me on about "Ink Storm". It gives me tattooed studs to want to touch and feel that extended part of them. Just as I've always wanted to stroke and grope Michael Brandon's ass to feel his extended part of him. Of course, he has a grope-worthy ass with or without the tattoo, but the tattoo ma kes it even more enticing.


THANKS to Kent Taylor of Raging Stallion for the photos, and to Michael Brandon and the cast of "Ink Storm" for being such FUCKIN' HOT inspirations for this post.
Posted by LeNair Xavier at 8:51 AM

Email ThisBlogThis!Share to TwitterShare to FacebookShare to Pinterest
Labels: Getting Out The Kinks